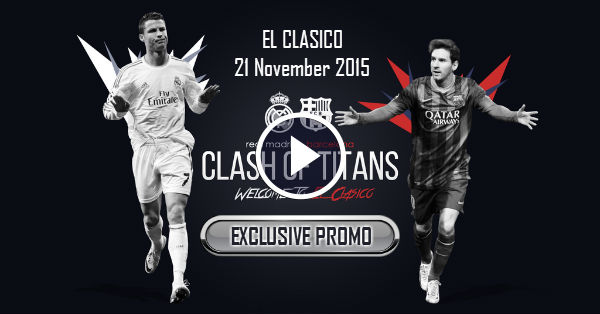 The football world is now looking at the much awaited El Clásico, the name that speaks all about the, as it is genuinely ‘The Classic’ in modern football saga. El Clasico is actually any match between fierce rivals Real Madrid C.F. and FC Barcelona. At the beginning of Spanish league, it was usually refereed to the fierce battle between the teams in La liga, but nowadays all the competition, which includes the UEFA Champions League, between these two teams are also refereed as the Classic. As a marvelous stats, El Clasico is the biggest club match in the football world, and is also among the most viewed sports events.

The El clasico is the genuine bi-product of the famous rivalry between Spain’s two most populated cities, Madrid and Barcelona. The cities are often identified with the opposing political support, where Madrid believe in Spanish nationalism and Barcelona relying on the Catalan nationalism. As far as the football match is concerned, the El Clasico is widely noted as one of the biggest and most viewed sports event of the modern world. Two clubs participating in this classic match, Real Madrid and Barcelona, are one of the biggest and the most richest football clubs in the world.

Besides the club’s own rivalry, the classic game is now also famous for the never ending battle between two modern geniuses of football – Cristiano Ronaldo and Leo Messi. As Los Blancos and Barca acclaimed themselves as the richest clubs in the world, Cristiano Ronaldo and Leo Messi are also the most richest and most feared football forces. The Clasico became so much important for the football world as both the team has their global fanbases which is in million in number.

As far as the most updated statistics is concerned, Real Madrid is now leading the head to head results with 92 wins in competitive matches where Leo Messi’s Barcelona is now standing at 89 wins. But as a surprise, Barcelona is leading the stats in total matches with 108 wins where Cristiano Ronaldo‘s Real Madrid is now touching the 96 winning saga. These two clubs, Real Madrid and Barcelona, are also the only clubs along with Athletic Bilbao that are never been relegated from the La Liga.

So subscribe us to stay updated about the coming El Clasico. And don’t forget to support Cristiano Ronaldo on 21st November, 2015. Have a happy Clasico.