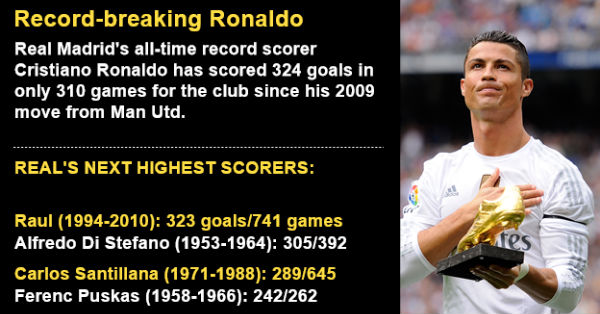 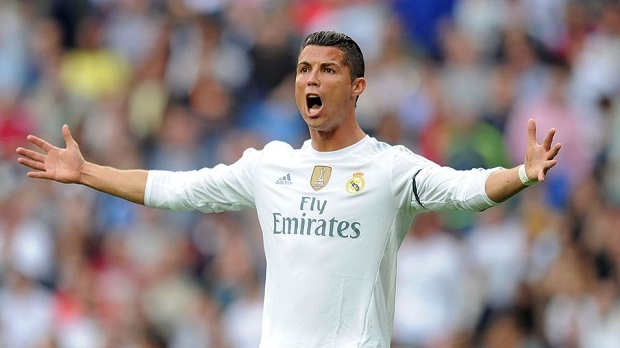 Cristiano Ronaldo crossed Raul as Real Madrid’s record goal-scorer when he found the net in his side’s 3-0 win over Levante.

The Portugal captain collected the ball around five metres outside the penalty region in the 30th minute of the game at Real’s Bernabeu stadium before taking a couple of steps and then rocketing a shot into the net for his 324th goal for the Spanish club.

Ronaldo, 30, took a mere 310 matches over seven seasons to overtake Raul’s tally of 323 goals, amassed in 741 games over 16 years.Alfredo Di Stefano is the only player except Real player to get past the 300 mark, netting 308 goals in 396 matches over 11 seasons.

Ronaldo had previously set up Marcelo’s goal in the 27th minute and substitute Jese Rodriguez closed the scoring in the 81st, allowing Madrid to surpass Villarreal atop the standings.

Real Madrid got the win in spite of playing with a less formidable squad because of injuries. Coach Rafa Benitez had to come up with strategy without defender Sergio Ramos, midfielder Luka Modric and striker Karim Benzema, who had netted six goals in as many league games this season. Madrid gained 18 points from eight matches, two points more than Villarreal, which hosts third-place Celta on Sunday.

Levante reached only six points from eight matches and can drop to last place in the 20-teaam standings basing on other results this weekend.

Defending champion Barcelona, still without Lionel Messi and Andres Iniesta due to injuries, has a chance to join Madrid with 18 points when it hosts Rayo Vallecano at the Camp Nou next Saturday.