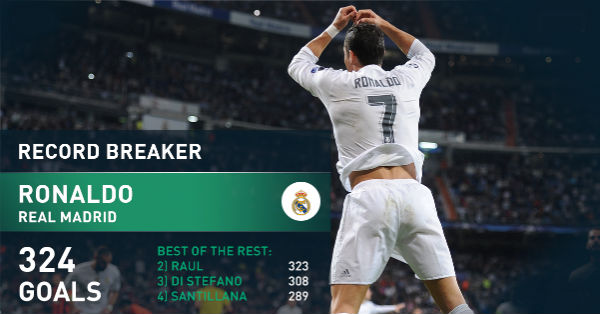 Cristiano Ronaldo shines as his team bags a win. 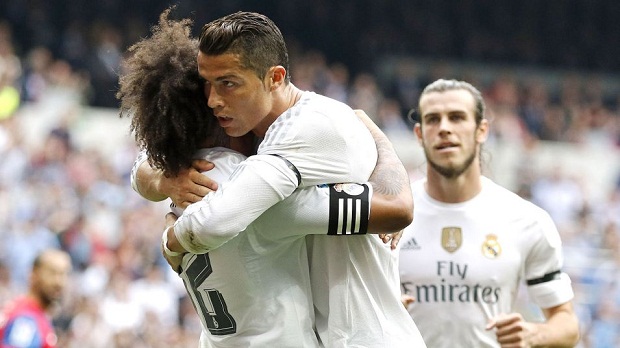 Cristiano Ronaldo set up a goal and netted another in a three-minute duration on Saturday to help Real Madrid  defeat Levante 3-0 and take the significant lead in the Spanish league.

Ronaldo set up Marcelo’s goal in the 27th minute and scored his own  with a clinical right-footer from just outside the area in the 30th, allowing Madrid to surpass Villarreal atop the standings.

Substitute Jese Rodriguez set the last nail in the 81st.

Defending champion Barcelona, still without Lionel Messi and Andres Iniesta because of their injury, has a chance to join Madrid with 18 points as it hosts Rayo Vallecano at the Camp Nou later Saturday.

Madrid was coming off two consecutive draws in the Spanish league, including a dull scoreless result against lowly Malaga in its last game at the Santiago Bernabeu.

Left back Marcelo opened the goal fest after a nice give-and-go play with Ronaldo, who fed the Brazilian inside the area for a left-footed shot into the far corner.

Ronaldo added up less than three minutes later from the top of the area, using two prompt touches to set up a firm low shot that just barely beat Levante goalkeeper Ruben Martinez.

It was Ronaldo’s sixth league goal and 11th in all competitions this season.

According to UEFA, it was Ronaldo’s 324th goal with Madrid, allowing him to overcome Raul Gonzalez’s mark as the club’s all-time leading scorer, but Madrid credited its player with the feat when he scored in a game last month.

Rodriguez sealed the score on Saturday by dodging a defender inside the area and firing a left-footed shot into the top of the net.n

Although Madrid dominated from the beginning at Bernabeu, Levante had a few good opportunities based on counterattacks. But Keylor Navas was outstanding in goal again, making a few very tough saves, including a remarkable one on a close-range header in the first half.