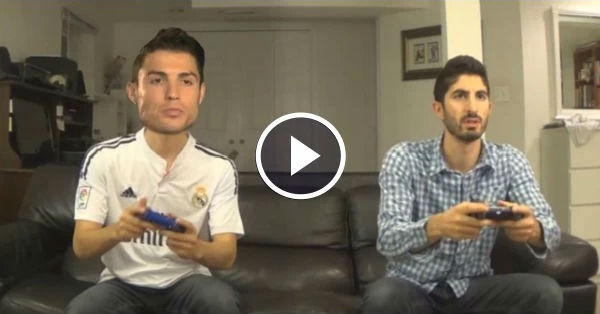 Every player is seen doing different acts in the clip. Ronaldo scores a goal and pulled his T shirt and shows his ABS.

Ronaldo is then dominated by the guy referring about the win less in the world cup.

Diego Costa follows and gives him a punch in the arm of the other in order to score a goal.

Then comes the Barcelona striker Lionel Messi. Neymar joins and starts playing and then comes Suarez.

Later on Arjen Robben of Germany plays the game with two controllers where the poor football fans begs to play the game between both of them.

Then comes Chelsea player John Terry, who whistles and a girl stood up from the back where the football fan looses attention and Terry netted in the playing FIFA Video Games.

Pepe joins the play. He was asked to watch the replay and Pepe takes a stick in order to not play the replay on the playing FIFA/ Video Games.

Then comes France re known player Zlatan Ibrahimovic who scores a bicycle. The football fan says he won’t be joining them for playing FIFA/Video games  ever.

The games stops and the video clip ends. Check out the video and enjoy.

After watching this video know that FIFA 16 will be out shortly.

If you like “FIFA” games, you’ll like “FIFA 16” a lot. It’s really that simple. After a couple of frantic days and lost nights, I’ve scaled the basic terrain and find myself as satisfied as I’d expect. I’ve disconnected my work email, shirked family responsibilities, ignored the fundamentals of personal hygiene, neglected or downright forgotten meals and embraced my role as the neighborhood recluse. Surveying the temporary carnage, it was worth it. It didn’t take long to get absorbed by the latest game in the mega-successful EA Sports franchise.

The game delivers on the features you’ve grown accustomed to while subtly tweaking and enhancing the peripherals. Plus the long-overdue addition of women’s national teams completes a curiously blind spot in the game’s lineage: Finally, the likes of Celia Sasic, Carli Lloyd and Eugenie Le Sommer get the placement they deserve in the virtual world.

Playing FIFA/Video games with friends is always fun. The change in rating of team, players etc are completely genuine when we talk about its originality with real football world.