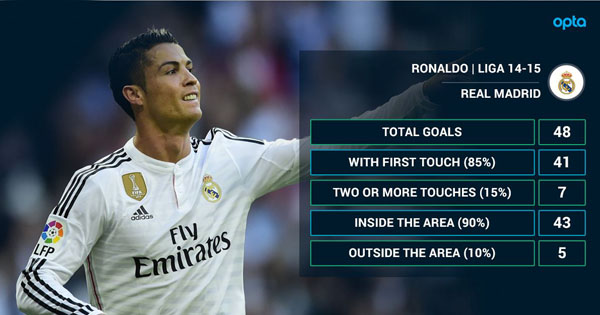 SPECIAL REPORT: The Portuguese has changed his game over the last 12 months and the stats show he is a very different player to the one that moved to Real Madrid in 2009

Sixty-one goals in 54 games represents a career-best return for Cristiano Ronaldo. The Real Madrid forward scored goals galore in 2014-15 to better his 60 strikes from 55 appearances in 2011-12. Overall, the stats seem similar, but he has in fact become a very different player.

When Madrid signed Ronaldo for a world-record fee of €94 million in 2009, they bought a winger with blistering pace, dribbling ability and tremendous technique – a player who could score from anywhere.

Six years on, Cristiano is still scoring. His 48 Liga goals means he will win the Pichichi award again this term and also claim the European Golden Shoe for an unprecedented fourth time. But the Portuguese has had to change his game in recent times as he gets older and at the age of 30, he is a different footballer to the one Madrid signed from Manchester United.

The Ronaldo running from deep and dribbling past defenders as a talented 24-year-old is now something of the past. The 2009 Cristiano set up chances for his team-mates; these days he finishes them off. And a look at his recent strikes against Sevilla, Espanyol and Getafe are proof of that. Although he still starts on the left, the 30-year-old is much more of a centre-forward these days.

Of the 48 goals he scored in La Liga this term, 41 of those (85 per cent) were netted with a single touch, while 43 of the 48 (90%) were converted inside the box. Ten (21%) were penalties, while 12 (25%) were headers – a career high for Ronaldo – and only two were scored from free-kicks (4%). And both of those came in the last few weeks of the Liga season as well, following a frustrating few months from dead-ball situations – once a speciality of the Portuguese.

Looking solely at the stats, CR7 looks much more like CR9 – a traditional centre-forward. But back in his first season at Madrid, when he actually wore the number 9 because Raul was still at the club, the numbers were different. In 2009-10, Ronaldo scored 26 times in La Liga, with only 61% of those coming from his first touch, while just 12% came from headers. That season, Ronaldo also netted eight times from individual strikes he himself had created – something now virtually redundant in his game, even if he has converted almost double the amount of goals in 2014-15.

In 2009-10, Cristiano played under Manuel Pellegrini, before featuring for three seasons with compatriot Jose Mourinho on the bench and then two more for the recently sacked Carlo Ancelotti.

With Rafa Benitez now set to take over next week at the Santiago Bernabeu, it will be interesting to see the evolution of Ronaldo’s game in 2015-16 as he closes in on Raul’s record of 323 strikes for Madrid. One thing, however, seems certain – there will be plenty of goals.