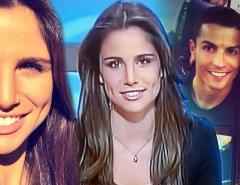 Ronaldo’s budding romance: Seems like Cristiano Ronaldo has moved on quickly after he broke with Irina Shayk who remained his sweet heart for five years. The football super star was recently spotted with a Spanish TV reporter Lucia Villalon Puras. The 29-year-old athlete is allegedly dating the 26-year-old sports journalist. The two were also pictured celebrating at the player’s Ballon d’Ore win honor on January 12.

Cristiano Ronaldo has been beau to Irina for the last five years. Irina is a fashion model and an actress. She is the known for her appearances in the Sports Illustrated Swimsuit Issue from 2007 to 2014. She was the cover model for the 2011 issue.
Speculations about the five year relation ending surfaced after Irina, 29, missed the ostentatiously attractive ceremony of the striker’s Ballon d’Or win last week following her decision to unfollow her ex on Twitter.

It is being claimed that Ronaldo dumped Irina because she refused to attend a 60th birthday party he was organizing for his mother Dolores.

However, these claims have been refuted by Irina’s spokesperson. He was quoted as saying that such claims have no truth in them. And that the cause of the split was not due to any trouble between Irina and Ronaldo’s family. Irina has not commented on the issue yet.

Meanwhile, Ronaldo officially announced: “After dating for five years, my relationship with Irina Shayk has come to an end. We believed it would be best for both of us to take this step now.” He also said that the decision was mutual and that he was still on good terms with the brunette beauty. Ronaldo has wished Irina “greatest happiness” in her future life.

At the same time while Irina was missing at the Ballon d’Or ceremony, Lucia Villalon Puras was seen accompanying the star athlete.

Lucia is a law and journalism graduate and currently is a presenter for Real Madrid Television and has previously worked with TV and Antenna 3. She is also an avid instagram user and frequently post her private and social life selfies and pictures.

While this remains to be seen yet how this new association turns out to be, some after effects of the previous relation are being seen already. As some say that Cristiano Ronaldo’s brand value may decline after breaking with Irina.
IPAM’s Daniel Sa was quoted as saying; “The CR7 brand has its own value, but is influenced by the personal life of the athlete whether he likes it or not”.

“Having a girlfriend in the world of fashion makes him have a greater financial impact than if she were a complete stranger.”

Anyhow fans wish the new couple happiness and good luck for the future.