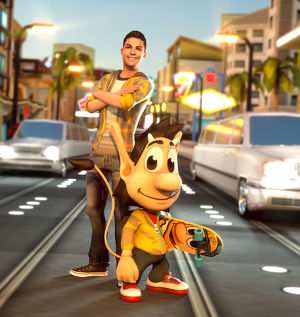 Cristiano Ronaldo, the world’s best footballer apart from Lionel Messi, finally has his own video game.

Cristiano Ronaldo finally has his own video game

The game is called Ronaldo & Hugo: Superstar Skaters, and it’s a mobile game and it’s an endless runner. And it’s out now.

In the game the player flees from the forever chasing Paparazzi Pete on the streets of Las Vegas. It looks like this:

Here’s a quote from the developer, Hugo Games: “We have no doubt that Hugo the Troll has the potential to become the world’s greatest gaming character – especially with Cristiano Ronaldo at his side.”