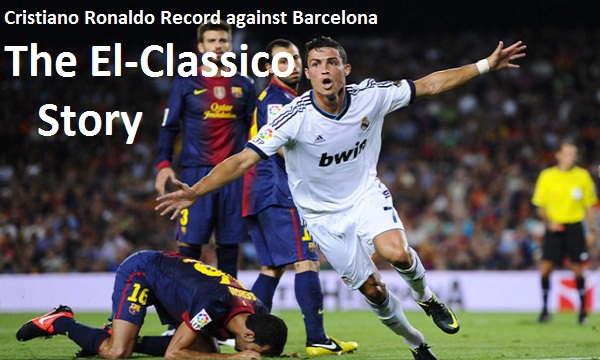 El-Clasico the biggest match in club football all over the world, where two arch rivals, two dominating forces of Spanish football and two giants of Europe, Real madrid and Barcelona meet. The El-Clasico never fails to entertain the crowds and hundreds of millions of fans around the world. The highly competitive match on one hand tests the players involved to their limits, on the other hand it often brings out the best from players. There are some players who have shined consistently in this clash of the titans, and Cristiano Ronaldo is on top of them. Lets have a look at Cristiano Ronaldo record against Barcelona

Before Ronaldo came to Real Madrid, He had already played against Barcelona a few times. The young Ronaldo playing for Manchester United had faced Barcelona 5 times, but despite giving pretty good performances in those matches he was unable to score any goal.

However, once Ronaldo joined Real Madrid his name has shined consistently on scoreboards of El-Clasico. His first goal against Barcelona came in a high profile El-Clasico, that was the Copa del Rey final of 2011, when Ronaldo scored a header in the extra time to break the hearts of Barcelona fan and to claim first trophy for Real Madrid after his arrival.

That goal was only a sign of the things to come and since then Ronaldo has scored regularly in El-Clasico’s. He has scored 7 goals in La-Liga against Barcelona, goals in Cop del Rey tournament against Barcelona and 3 goals against the arch rivals in Supercopa encounters.

Consider the tussle between Ronaldo and Messi to score the most goals in every match they play, one can be sure of many more goals from Ronaldo in coming El-Clasico’s