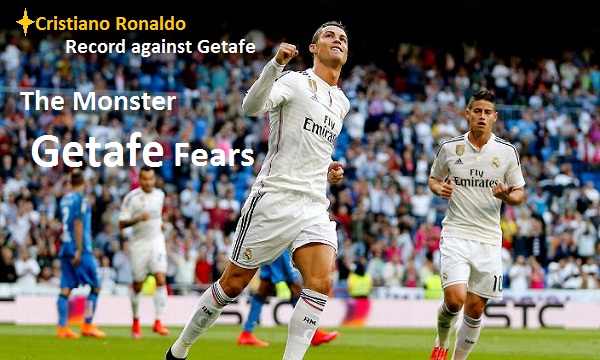 If you start making a list of all the teams who have suffered the most at the hands (well at the feet would be a better term to use, anyways) of the worlds best player, Getafe would be one of the teams in the top quarter of that list. Every time the legend faces Getafe, he leaves trails of destruction and leaves the Getafe fans heartbroken. Ronaldo boosts such a phenomenal record against Getafe that no wonder he has become a much feared monster for Getafe. For a better understanding of have a look at the Cristiano Ronaldo record against Getafe.

Ronaldo boosts one of the best goal scoring ratios against Getafe by any player and by any standard. The world best player has scored 18 goals in only 10 matches which he has played against the Madrid’s city rivals. Ronaldo scored hat-trick in the 20010/2011 season against Getafe. He repeated the same performance and scored another hat trick against Getafe in the 2012/2013 season. Ronaldo continued destroying Getafe’s defense in 2015 when he scored a brace against them at the Coliseum Alfonso Perez in January 2015. The player scored another brilliant hatrick against Getafe in May 2015 when Real Madrid thrashed the helpless Getafe side by 7 – 3.

With an amazing goal scoring ratio of 1.8 goals per game against Getafe one can be sure that Getafe wont be looking forward to facing Ronaldo anytime again. However, to their bad luck they will most probably be facing him again in the upcoming season as the player has decided to stay at Real Madrid.

The astonishing stats prove that Cristiano Ronaldo has beocme the monster which Getafe fears.