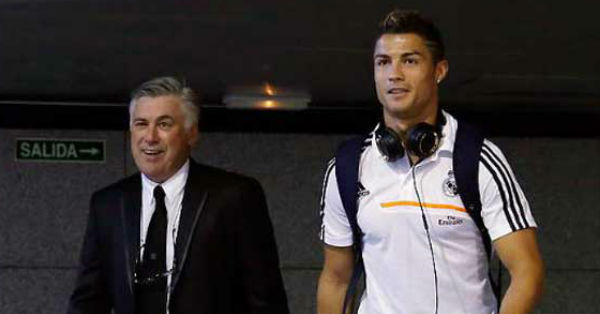 Former Real Madrid and Paris Saint-German manager Ancelotti believes Ronaldo won’t be joining PSG next season although he is having a tough time at Real Madrid from last few games.

Barcelona without Lionel Messi is on the back foot as they lost two games this season out of seven. But Rafael Benítez’s Real Madrid could not take the genuine advantage in the absence of the expected Ballon d’Ors of 2015. Ronaldo is not at his best and Real Madrid is suffering as they have drawn three games this season out of which two matches were in favour of them.

The 30-year-old, Ronaldo has been repeatedly linked with Paris Saint-German but he choose to play for Real Madrid which will help him to become the all-time leading scorer in La Liga and level Raúl González Blanco’s club record of 323 goals for the club.

Ex-PSG striker Pauleta told RMC that French club, PSG “deserve” to have a player like Ronaldo.

However, the former Real Madrid manager, who helped his then side to  become European champions for a record of 10th time anticipated that Ronaldo won’t be moving back.

When asked by  Le Parisien about Ronaldo’s career “I don’t know,”
“Last week he created history at Real Madrid by levelling Raul’s record.

“I don’t see Cristiano Ronaldo changing club. I think he’ll finish his career at Real Madrid where everyone likes him.

“Why not?” he asked Le Parisien. “I have a very good memory of Paris, of PSG. I have good relations with everyone, with Nasser.

“But I’m thinking about something else and then PSG have a very good manager in Laurent Blanc. I hope he can continue and will shine in the Champions League.”