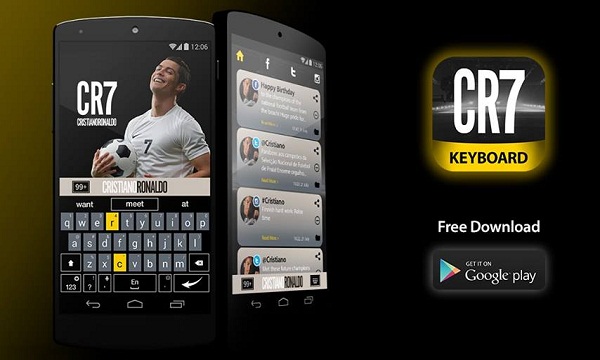 Cristiano Ronaldo has launched his CR-7 themed keyboard on Google play  store. The app is named “CR-7 look and feel” and it not only features a pretty cool Ronaldo themed keyboard but it also keeps you updated with all the latest information and news regarding Cristiano Ronaldo. The keyboard itself is very cool and is truly a signature CR-7 stylish product. In addition now the fans don’t have to keep searching the news in order to find all the latest happenings on the player. You will get all the updates by CR-7 on this new app, from his Facebook account to his twitter account.

Ronaldo has been using his stardom and world wide fan following pretty wisely for launching and marketing his own brand of products. In the virtual world, earlier Ronaldo had launched “The Game” which was a one of its kind football app for linking and setting up matches against teams in your area and around the world. On the other hand, his products like Underwear collection, Shirts collection and formal shoes collection have already been quite successful among his fans.

The new Cristiano Ronaldo keyboard app named “CR-7 look and feel” is free to download and is available at the Google Play store.