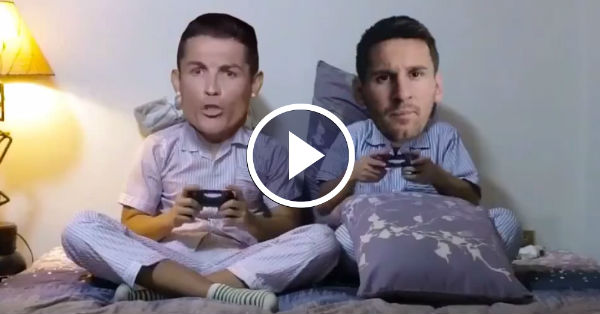 Ronaldo and Messi is having a good Friendship

Ronaldo and Messi are undoubtedly the best footballers from a few years now. Both the star players play from the arch rivals Real Madrid and Barcelona which brings the debate about them when we speak about the best among them.

This debate has continued for a long period now which was well maintained by Messi and Ronaldo. It is not because the Ballon d’Or isn’t so far from now, which is most likely in Messi’s favour this time on a humorous level.

In a video made by FootballOle, it is observed that Ronaldo and Messi are maintaining a good friendship. This video has been viral in social media where the video is in imaginative based.

Also Read: “We are all blessed that we are seeing Ronaldo and Messi in the same era” – Steven Gerrard

In the video, the well-known football duo is seen walking on the streets, taking selfies, working out in the gym, competing at video games, riding a bike, doing some shopping.

This Video was created intending to unite among the fans of Messi and Ronaldo. Even Ronaldo and Messi  themselves would love this creation presumably. Watch the Video below:

Also Read: Cristiano Ronaldo and Messi failed to increase goal totals rapidly
It is believed by many that Ronaldo and Messi are not enemies although they have individual rivalries as well as their clubs. It is labelled by some of their fans that the duo are enemies but both have denied to accept it when one bear that notion.
Both of them have achieved various milestones throughout their career, with Messi winning Ballon d’Ors for four times whereas the Portuguese captain clinched for the third time last season.
The Argentina captain is currently out injured and could spend two months in the sidelines as per reports.

Messi scored 6 goals and 2 assists this season whereas Ronaldo scored 10 goals and 1 assist in respect to their play in all the competitions.