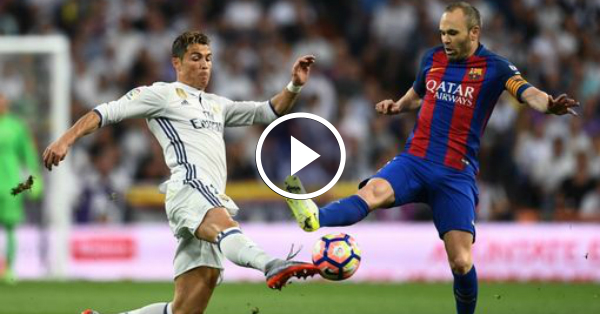 The much anticipated El Clasico 2017 ended with Barcelona bagging a win after the draw between the two teams in 2016. The match turned out to be thrilling one from the word “go”, as, in the 3rd min, there was a penalty call as Umtiti caught Ronaldo’s leg, followed by saves, shots, and a yellow card in the 13th minute, as Casemiro got booked needlessly for fouling Messi on the halfway line.

Both sides continued to play an incredible game, with heavy action in both the boxes, ad several attempts to score a goal were made, but saved in the right moment. As the match continued, Casemiro opened the scoring of the match for his team, with what seemed like a rather shady goal, as a back-post shot by Ramos from a deep cross was turned into a point on the scoreboard in favour of Real Madrid. But the score was set level by Messi within just a couple of minutes.

The pace of the match picked up even more with the two goals, as the two teams became desparate not to end up with yet another draw like the previous one. After constant fight between the two teams, the first half came to an end with the scoreboard reading Real Madrid 1-1 Barcelona. As the teams moved to the second half of the match, they continued to play gloriously, trying their best to grab a goal. after several chances and saves, Ivan Rakitic scored the second goal for Barcelona, thus grabbing the lead again. after that, the pressure on Real Madrid became quite evident as they constantly seemed to try and deflect the ball from the opponents.

Ramos got dismissed with a red card for lunging Messi, which left the Real Madrid player extremely angry, and this was followed by a yellow card for Mateo Kovacic, again for a challenge on Messi, who was already writhing in pain from all the injury he received throughout the match, being tossed and turned around the field. In the 85th min, James Rodriguez leveled the score, and it seemed like once again, the El Clasico would end in a draw, until in the very last minute of the extra time, Messi scored the 3rd goal for his team during this match. This was also Ronaldo’s 500th goal for Barcelona in total.

Thus, the victory went to Barcelona against Real. It will be again in the next El Clasico match that Real Madrid will have the chance to win.