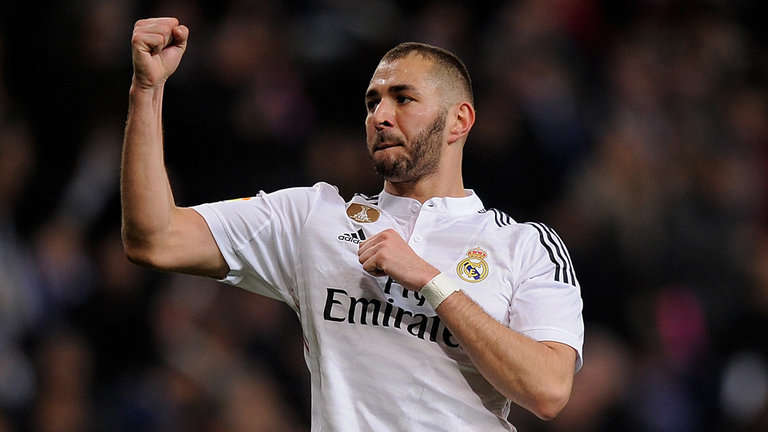 Real Madrid welcome back striker Karim Benzema into their squad as they look to stay on the coattails of La Liga leaders Barcelona with victory against Valencia on Saturday.
Although the Frenchman may not be fit to start, his return will come as welcome relief to manager Carlo Ancelotti, who has been without Benzema for the last six games since he suffered a knee injury in April.

Real’s recent injury worries have started to ease with Gareth Bale back in the squad after a lengthy spell on the sidelines for their 2-1 Champions League defeat to Juventus on Tuesday.
The team are still without injured midfielder Luka Modric, whose ability to link-up with the forwards has been badly missed, but Benzema is on the comeback trail.

“Benzema is available and feeling strong but he is not 100 percent,” Ancelotti said. “Tomorrow I will decide whether he starts or he is on the bench.”
Ancelotti was heavily criticised for Real’s performance in Turin and for playing centre back Sergio Ramos in midfield where he struggled.

They need to bounce back in a difficult game against fourth-placed Valencia, who are fighting for a Champions League spot, and Ancelotti has not ruled out playing Ramos in midfield again.

“I have not decided who will play in the middle of the pitch and I will make a decision on the day,” Ancelotti added.
“Ramos has my confidence and he is capable of playing in a lot of different positions. I wasn’t afraid to play him there against Atletico and Sevilla.

“He has played well there but he didn’t do well the other day.

“The team is fine mentally and we are treating the game now against Valencia as a final. After that we will start thinking about the return leg against Juventus, there is no way I will rest anybody.”