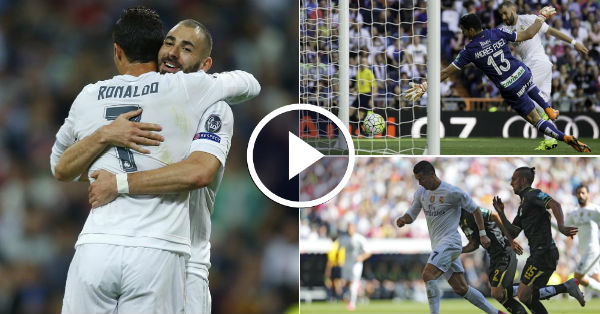 On September 19, 2015, Real Madrid had a clash with Granada for the La Liga, at Bernabeu. As far speculations regarding the match, it was hard to make a case in favour of Granada, led by Rochina, despite the number of talented players on their team. The match was started, and as it was expected, the home side took control of the ball within just a couple of minutes after opening. Accordingly, Granada started showing signs that they would be operating with a deep defensive line.

In the 6th min of the game, Real even managed to break Granada’s line of defence, with Modric sliding a super pass towards Benzema, though he was in an offside position. But the first real chance came to Granada when Edgar Mendez found a space to whip a fantastic cross. However, Real regained the ball quickly. Half chance for the guest team, Real Madrid, was seen, as Benzema drove down the left, though Lopes came back to make the challenge. Real seemed to be taking control of the possession without threatening to take the lead, while Granada held on nice and tight at the back to resist the danger. As Benzema slid a super pass into Ronaldo, Granada had the ball in the back if the net, and a goal was disallowed. 26 min into the game, and yet another opportunity for the visitors came, as Lopes met a super free kick by Rochina. But the header went straight at Naval from close range.

Real again had an opportunity as Benzema collected a fine pass from Isco , but Granada goalkeeper made another great save. And in the 32nd min, Ronaldo did his bit from inside the box, and Modric tried to score, but Andres made the most stunning same of the match.
The match went on as the two teams locked horns and went ahead with a great competition. However, with 10 min left for the first half to end, Edgar Mendez from Granada got booked for a late challenge on Marcelo. Minutes later, Ronaldo hit the post, though from the offside position.

Success kept causing all kinds of problems for Real Madrid, as he even charged into the opponent’s box at one point of time, though Navas became the saviour. And with just a few minutes left for the end of the first half, Isco again lit some hope in the minds of fans, but he just got booked 2 min later for a late tackle on Krhin.
Ronaldo faced a shot from Benzema, which was too strong for him in the additional 1 min, after which the first half came to a close, with the scoreboard reading Real Madrid 0-0 Granada.

As the match got restarted, everyone waited with bated breath to know if Granada would be able to create some shock. And Granada really did take a strong approach in the second half. This was a matter of concern for Real, as they could not afford to drop too many points at this stage of the season.  A chance to take the lead appeared for Granada in the 52nd min as El-Arabi sent Success through, but the attacker could not make it. However, it was ultimately Real Madrid that managed to take the lead, as Benzema headed a superb cross by Isco straight into the net.

In the 60th min, a sensational chance came Granada’s way, with El-Arabi dancing into the opponent’s box, but Navas made a miraculous save. Surprisingly, after this, Ibanez came to replace Success. There still seemed enough chances for Granada, and in 25 min before the end of the game, Ronaldo hammered one towards the box of the opponent, but Fernandez made a superb save. Ronaldo came close yet again, only for his shot to be swung away.
By this time, Real had started taking a threatening approach, with Carvajal and Benzema making excellent efforts. Chances of comeback for Granada became bleak, and the pressure started becoming more evident. Marquez got booked for a late challenge on Vasquez, and Real had a free kick in a dangerous area as Lopes felled Isco. Ronaldo made another attempt, but it went straight into the wall.

The last 15 min of the match started with El-Arabi’s movements causing problems for Varane. The match rolled on, and another penalty shout came for Real as Isco went down inside the box, following a strong challenge from El-Arabi, but with no particular interest from the referee. Cheryshev and Vasquez took turns to deliver from wide areas, but Granada cleared their lines again. Cheryshev was the first to react and a chance came for Granada, though for no reason.
The match went ahead, and 5 min we added to the match after the end of 90 min, though no real changes were seen during this time. At the end of the match, the scoreboard read Real Madrid 1-0 Granada. Host team Real Madrid managed to acquire the victory from the guest team.