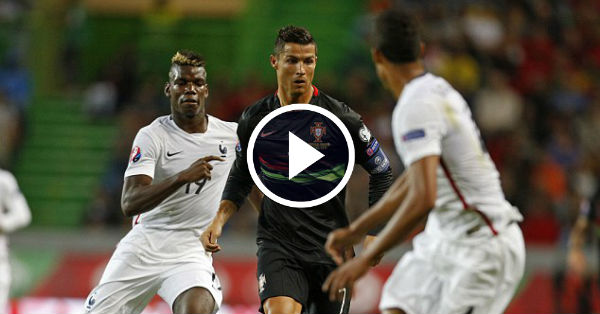 Despite Portugal’s high-spirited gameplay, France hangs on for a 10th consecutive victory over them

Portugal, under the leadership of Cristiano Ronaldo, came face to face with Euro 2016 host France for a friendly match on 4th September, 2015. Portugal kick-started the match, as they looked to their first victory or even draw against France in 40 years. The team seemed to be relying on Ronaldo from the beginning of the match, and his first touch led to an attempted flick in the full-back, while Sagna slipped in his effort to fend off the danger. However, he managed to keep the skipper from making an early disaster for his team.

While France seemed to have a better start, with their confidence playing a major part, there wasn’t much to tell the two teams apart. 9 min into the game, and Ronaldo had already switched over the right flank. It was expected that he would be visible during the game. Portugal soon showed a long spell of possession, but France was quick to up their defense. Pogba showed some good moves for France as he dropped off before finding Sissoko in a small space down the tight flank. As Portugal tried to respond with a break down their right, the two teams locked horns, with France showing some great defense.

15 min into the game, debutant French player Fekir faced his nightmare, as he was forced to limp off inside, to be replaced by Antoine Griezmenn. Meanwhile, Matuidi managed to keep the ball in, and squeezed into the middle. The shot went across Griezmann’s head, but Eliseu took a chance at the back post, and sent the ball back to Griezmann. However, Patricio was quick to clean up the mess.

The first yellow card of the match was shown at the 21st min of the match. Former teammates Evra and Nani were hostile, as the France left-back had gone in hard and late on the Portuguese winger. The match rolled on, and for a friendly, it had way too much action and locking of horns between the two teams. Just at the end of half an hour, the first big chance came for France, but Matuidi’s poor finish led to no change in the score. Soon, Ronaldo fouled Sissoko, and France won a free kick, but Griezmann have a disappointing delivery.

In the 35th min, France got a half chance, with Sagna swinging a cross towards the back post. Benzema received a shot from Matuidi behind him, but the midfielder lashed a volley off target. Despite expectations, Ronaldo’s coveted presence was not felt, as the minutes rolled on to put an end to the first half, with an addition of 2 min.

As the match restarted, the teams showed a renewed vigour. Chance kept pouring in for France, as they kept frequenting the opponent’s box, but none of their efforts translated into a game-changing shot into the box. The level of energy and hostility was pretty high, as well, and it led to yet another yellow card for the evening, as Benzema wrong-footed Danillo to drive to the goal, which prompted the Portuguese man to tug the arm of the striker.

The host, as well as the visitors, made changes in their teams, and continued to be at each other’s throats. Portugal did not seem ready to let go, but in the 85th min, their aim of getting the first draw or win in 40 years was broken, as Mathieu Valbuena scored a goal for France. In the last few minutes of the game, pressure seemed to be arriving from the host. At the end of 0 min, the score card read France 1-0 Portugal. Anticipations regarding whether or not France would be able to attain their 10th victory consecutive victory over Portugal were high, as 3 min were added to the match. At the end of the additional minutes, France emerged the winner in this match, despite Portugal’s efforts.