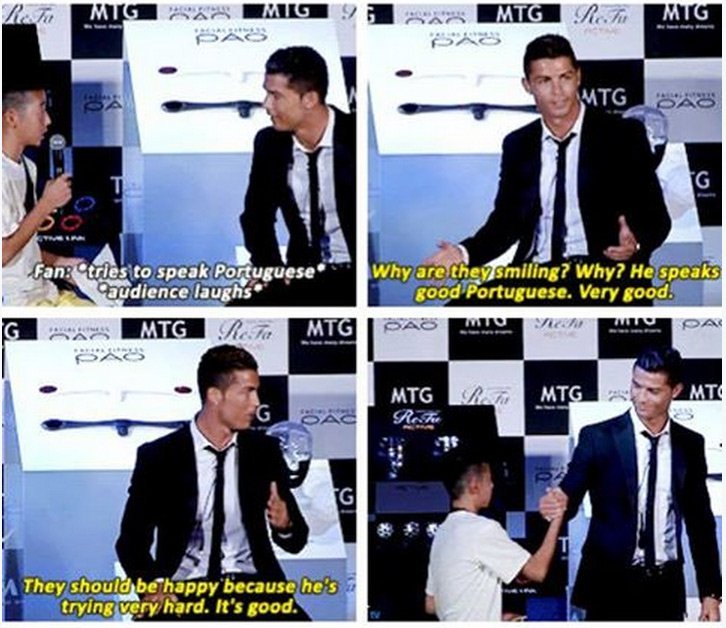 The Portugal and Real Madrid star often gets a bad press for his perceived arrogance – but the evidence is stacking up to shatter that conception.
The picture above says it all: Cristiano Ronaldo, the preening prima donna more interested in showing himself off than in being a good footballer and a decent man.

And it’s easy to see where it comes from. The goal celebration above wasn’t a man cheering after a length-of-the-pitch run finished with a wonderful strike; it was a piece of outrageous gloating after slotting home a penalty in the death throes of a match that had already been comfortably won.

Rather than celebrate with team-mates, Ronaldo made the moment about himself, running away from the men who are behind his glory, posing for the cameras.

In short, being a bit of a pain.

Yet while many fans really relish getting bees in their bonnets about such moments, there’s an increasing groundswell of evidence to suggest that the world’s best footballer (or second best, depending on whether it’s he or Messi who’s currently in a slight peak or dip) is actually a decent guy.

Not so long ago we had stories such as this, and this, in which the Real Madrid striker instantly put his hand in his admittedly-bulging wallet to help out those less fortunate than him.

And now there’s another great moment, when he sprang to the defence of a young Japanese fan trying to ask him a question in Portuguese. When others laughed and jeered the youngster’s faltering efforts, Ronaldo told them off, praised the boy for trying, and basically did his best to put the world to rights.

Those who are truly arrogant, unpleasant people tend to revel in the opportunity of a bit of sneering and bullying; instead, the 30-year-old took a moment to restore a bit of decency when a no-doubt-hugely-nervous teenager almost fluffed his lines upon meeting his idol.