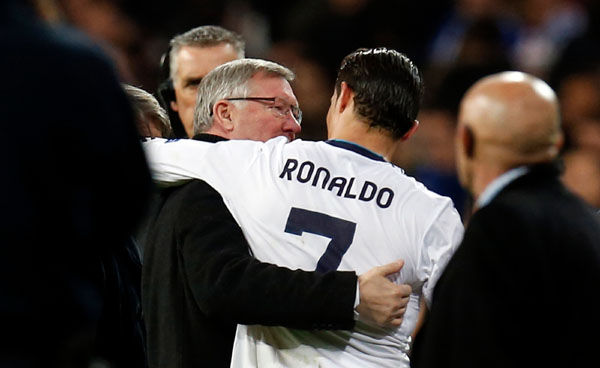 The Barca and Real Madrid forwards have won the last seven Ballon d’Or awards between them, marking the pair out as the two best players of their generation and among the greatest to have ever played the game.

Ronaldo already has 50 goals this season, while Messi has shone since the turn of the year to help inspire the Catalans to the top of La Liga at Madrid’s expense.

And Ferguson, who managed Cristiano Ronaldo for six years before the Portugal international left Old Trafford for the Santiago Bernabeu in 2009, has backed his former protege as the more complete footballer.

“Ronaldo is tough,” the Scot told BBC Sport. “People say ‘who is the player in the world’ and plenty of people quite rightly say Messi. You can’t dispute that opinion.

“But the thing about Cristiano Ronaldo… Ronaldo could play for Millwall, QPR, Doncaster Rovers or anyone and he’d score a hat-trick. I’m not sure Messi could do it.

“Cristiano Ronaldo‘s got two feet, he’s quick, he’s good in the air and he’s brave, though Messi’s brave too of course. I just think Messi is a Barcelona player.”

Ferguson also labelled the 30-year-old as the player who advanced the most under his tutelage over his 26 years in charge of United.

“Ronaldo is the biggest improvement I ever had at Manchester United really because he came as a young skinny kid at 17,” the retired coach added. “And yes, he had stuff such as diving which people used to criticise him but, once he got out on the training field, he was fantastic.

“The most important thing for a great player is decision-making and that improved over Ronaldo’s time at old Trafford. Him and Paul Scholes and Ryan Giggs, you have to say, are the best three players I ever had. Bryan Robson and Roy Keane and Eric Cantona were great players, too, but not [at their level].”