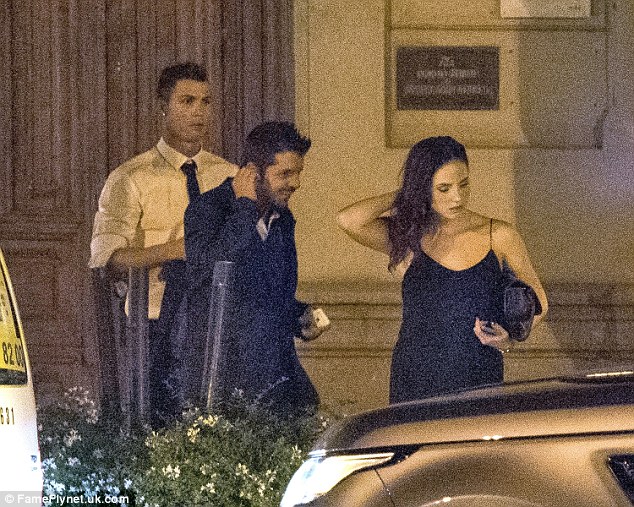 The Real Madrid superstar, who has scored eight goals in two matches this week, was spotted leaving a restaurant in the Spanish capital with the girl and his assistants.

And on Tuesday, the 30-year-old scored a hat-trick as Real started their Champions League campaign with a 4-0 home win over Shakhtar Donetsk.

Those goals took him clear of Lionel Messi as the all-time leading scorer in the Champions League on 80 goals and also moved him to within two of Raul as the club’s all-time top scorer.

It marks a stark contrast from the start of the season, when Real drew 0-0 with Sporting Gijon and the media speculated about tensions between Ronaldo and new manager Rafael Benitez.

But Real have now scored 15 goals in three matches, conceding none, and those troubles have been consigned to the past.

Speaking ahead of Saturday’s match with Granada, Benitez said: ‘Cristiano is the most important player and we need him in order to win trophies.

‘I speak with him all the time during and after training. We talk about tactics and about different ideas.

‘[The forwards] know that they can move further forward or to the sides when they want so as to be more effective for the team.

‘It is most important for the team to be balanced and also that defensively we work hard.’

Real do have a number of injury concerns ahead of the weekend, however, with Gareth Bale limping out of their game with Shakhtar with a calf problem.