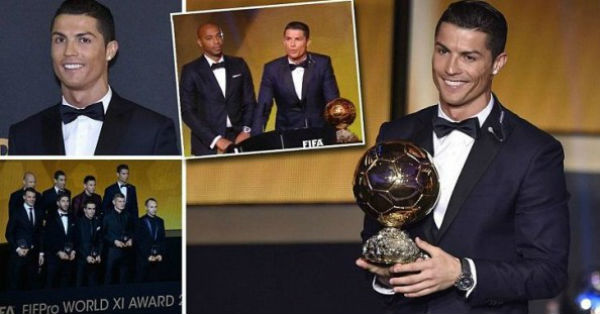 Cristiano Ronaldo will not win Ballon d’Or  this year according to the readers of Spanish Daily Marca.

The Capital based newspaper held a poll among their readers yesterday, to know who will win the Ballon d’Or this time in their opinion,with FIFA shortlisted 23 man for player of the year award. Cristiano Ronaldo, who won the golden shoe this year, overlooked for Ballon d’Or by readers and not even make to the final top three. The Real Madrid star is a strong favourite to become FIFA player of the year for the third time in the row along with his main competitor Lionel Messi. But Marca poll result is came as a total surprise, with Argentinian International winning the poll and his Barcelona teammates, Neymar and Luis Suarez finishing second and third according to voters. Lionel Messi received  26.8 percent of the total votes, while Neymar come as second strongest candidate for player of the year award after receiving  19.9 votes while former Liverpool striker Luis Suarez received 17.5 percent votes.

If things happen that way fans has suggested, it will be the first time since 2010 that Cristiano Ronaldo will finish outside the top three. after being named as player consecutively in 2013 and 2014. While in 2010 other two candidate, who made to the top three were Barcelona duo Andres Iniesta and Xavi, and this year is replaced by Luis Suarez and Neymar.

Barcelona recovered from their slow start of the season under Luis Enrique to win Spanish League, Copa Del rey and Champions League, whereas  Cristiano Ronaldo’s Real Madrid ended their 2014-2015 campaign without a single trophy. Messi, Suarez and Neymar trio was untouchable during the last campaign, but Real Madrid superstar was exceptional in last season, setting a new milestone to become the Real Madrid all-time top scorer. Both Cristiano Ronaldo and Lionel Messi has made to top two of Ballon d’Or for last four years in a row.