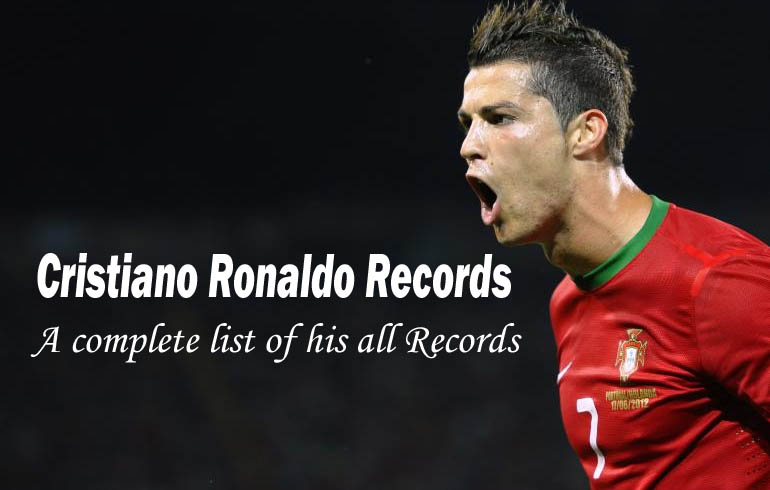 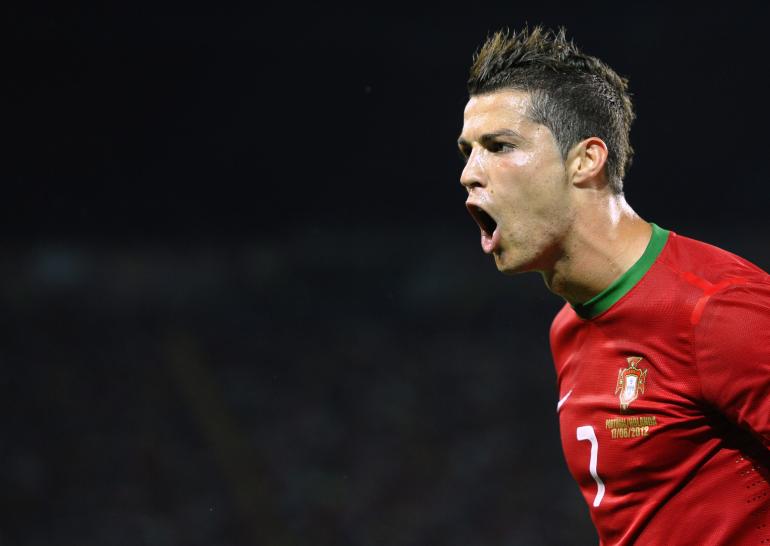 Cristiano Ronaldo Records: A complete list of his all Records

Cristiano Ronaldo is the record making machine. The ballon d’Or winner leaves no record unturned. His mission seems to break all the previous records and make such new records with are impossible to be broken. He is truly a special player with special skills and technique.

Here we have described his all the records that depicts his true talent and class and serve as a proof of his being the best in the world of soccer.

1) Most international goals in a year, combining club and national team: With 25 goals in 2013 (shared with Lionel Messi and Vivian Woodward), Ronaldo became the joint holder of the record for maximum number of goals in a year.

2) His hat-trick, one goal from a free kick, one from 30 yards on the left wing and one penalty, gave him 40 league goals in the 2011-12 season, making him the only player in La Liga history, or in any other major European league, to score 40 goals in two seasons

3) Cristiano Ronaldo scored in every minute of the game: The first player to achieve this feat before Messi. The history making goal came against the rival Atletico in the 17th minute penalty opener.

1) Cristiano holds the record of most European Golden Shoe awards with 3 awards. The first award came in 2007-08 season playing for Manchester United. The second and third came playing for Real Madrid in 2010-11 and 2013-14 seasons respectively.

2) His 17 goals record is the most goals scored by anyone in the European Cup Season. Cristiano stands 2nd in all time goal scorers in European Cup all seaons with 73 goals.

3) Cristiano scored 15 goals in 2013 calender year. The most number of goals scored by anyone is UEFA Champions League.

4) Another record of UEFA Champions League in a group stage of a single season the most goals scored recored holder with 9 goals is Cristiano Ronaldo.

5) In 8 consecutive matches of UEFA Champions League he never missed a change of scoring goal in a single game.

6) Winning European Golden Shoe in 2 different leagues ie. EPL with Man United and La Liga with Real Madrid make him the first and the only player to do so.

7) This records is obvious after scoring so much goals in UEFA Champions League seasons. He is the first footballer to ever score more than 10 goals in three consecutive UEFA seasons.

8) Playing for Man United and Real makes him the owner of another record – first footballer in the history of the European Cup to score for two different winning teams.

10) Playing for Portugal in the UEFA European Championships he is the holder of 23 goals records.

11) With 11 away matches in which Cristiano Ronaldo scored goals makes him the most consecutive UEFA Champions League matches scored in.

12) The most away goals scored in the UEFA Champions League award goes to Cristiano Ronaldo for his 37 goals.

13) Most UEFA Team of the Year appearances: 8 times

14) Appearing from 2007-2013 made him the most consecutive appearances in the UEFA Team of the year with 7 appearances.

16) Cristiano Ronaldo also likes to share his awards. He shared an award with Lionel Messi of most appearances in the FIFPro World XI with 7 appearances from 2007-2013.

17) First and only player to appear in the FIFPro World XI for two different clubs i.e. Manchester United and Real Madrid.

You may also like: Cristiano Ronaldo Records in the Champions League

1) The first player to score against every team in La Liga in a single season. Achieved this record by scoring against Real Mallorca in 2013-2014 season.

2) The first player ever to score in six consecutive Clásicos.

3) In a single season of La Liga, Cristiano Ronaldo scored 20 away goals making him the first player to do so.

5) He scored 9 goals in three consecutive La Liga matches making him the most goal scorer.

7) With 25 goals in five consecutive La Liga seasons he became the first footballer to do so.

9) Lionel Messi and Cristiano Ronaldo share a record of 23 hat-tricks – the most number of hat-tricks in La Liga.

10) Cristiano Ronaldo holds the record of scoring 15 goals, the most number of goals in La Liga after eight games and when he reaches his 10th game he made another record of 17 goals. Though he didn’t play in the one of those games.

His record breaking streak didn’t end their he went on to make another record in the same season after first 12 games scoring 20 gaols and the after 15 games, 25 goals record, being the most number of goals scored in La Liga after the first above mentioned games.

15) He has the best La Liga penalty conversion rate with 93% of at least 30 penalty kicks.

1) Cristiano Ronaldo holds the record of scoring highest number of goals to win the premier league. 31 goals in 34 appearances.

2) He scored 46 goals, the most number of goals in a single La Liga season.

3) He holds the record of scoring most number of hat-tricks for Real Madrid. CR7 scored 7 hat-tricks in 2011-12 seaon.

5) Cristiano Ronaldo scored fastest 100 league goals than went on to extend this record with 150 league goals and as their is no stoping him he added another 50 to this 150 and became the fastest to score 200 league goals for Real Madrid.

7) The first Real Madrid player to score in the first four league matches of a season.

9) With 14 goals in 5 consecutive league matches he became the holder of another records.

10) 15 goals in 7 consecutive league matches is another still unbroken record for Cristiano Ronaldo.

12) Most consecutive league games scored in for Real Madrid: 11 games

13) He is the first Real Madrid player to score on every day of the week.

1) First and only Manchester United player to win the European Golden Shoe.

1) Portugal all-time top scorer with 52 goals, in his 118 appearances for national team from 2003 to onward.

3) Luis Figo, Nuno Gomes and Cristiano Ronaldo together holdes the record of most matches played in UEFA European Championship finals with 14 matches.

4) Cristiano Ronaldo is the only player to play in 13 World Cup final matches.

5) Youngest player to reach 100 caps: 27 years, 8 months and 11 days. He achieved this record in 2008 while playing against Northern Ireland

Keep visiting ronaldocr7.com for latest and interesting on Cristiano Ronaldo.