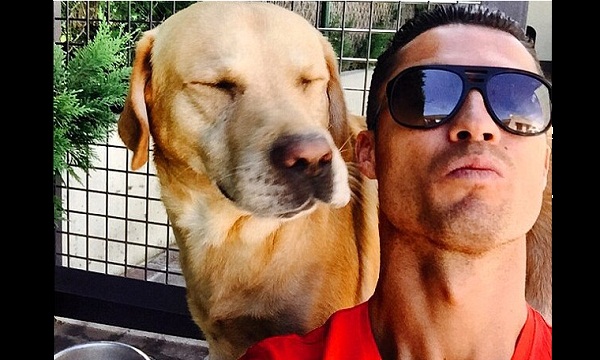 As Cristiano Ronaldo is prepares to kick off the new season with Real Madrid, he took time out to take a cool pre-season selfie with hi pet Labrador. Ronaldo posted the photo on his Instagram. He introduced the pet labrador as Marosca. The player was wearing pretty cool shades and made sure to make a perfect pout face with his Labrador just behind his right shoulder.

Ronaldo is all set to start the new season on 23 August. The player has not seen much of the pre-season friendly aciton owing to the minor back injury. Before the new season starts on 23 August, Ronaldo an  Co will be facing Galatasaray on Tuesday for a friendly. It has been confirmed that Ronaldo that Ronaldo will play in that match.

It should be mentioned that without Ronaldo in their ranks, Real Madrid has only managed to score 2 goals in their last 4 pre-season friendlies, which goes to show the dependence of the side on CR7. The team will surely be getting a boost in team spirit and quality of attack with the return of World’s best player.

With Ronaldo posting relaxed selfied on Social Media, fans can feel happy that the player is looking relaxed and good, which is a sign of a tremendous season ahead.