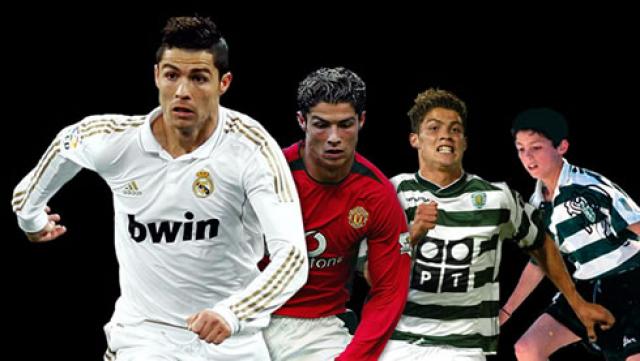 One of the secret of Cristiano Ronaldo’s success, he started he career in earlier life. He has a clarity where he wanted do go, a rare gift possessed by a few. Where ever he went he mesmariesed the audience and the players. And soon he was renowned a special talent, a God gifted player.

Presented below is a brief over-view of Cristiano Ronaldo Career as a Club Player.

The journey started at age eight when he played for amateur team “Andorinha”, where his father was the kit man.

In 1995, Ronaldo signed with local club “Nacional”, and, after a title-winning campaign, he went on a 3-day trial with Sporting Lisbon, who subsequently signed him for an undisclosed sum. 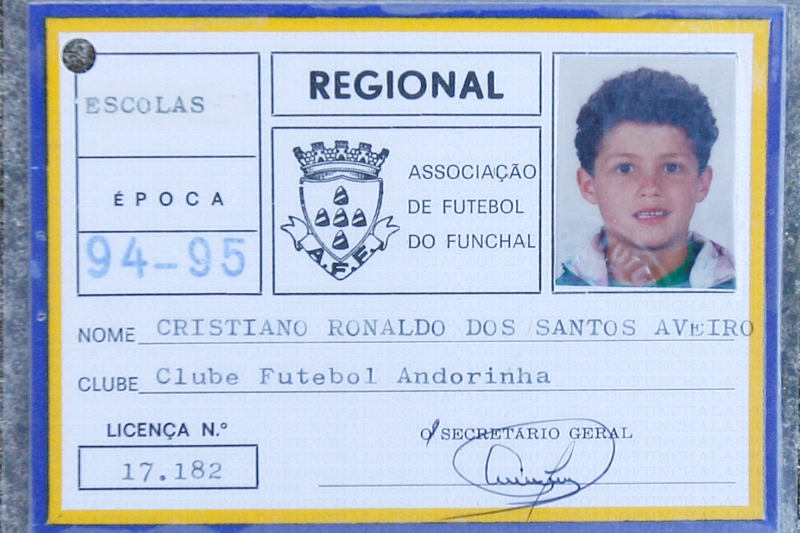 After joining he started training at the club’s football academy in Alcochete. His career at Sporting Lesbon was full of achievements. He played under 16, 17, 18, B-team, and the first team of Sporting Lisbon becoming the first player to achieve this milestone An under 18 star was performing like pro players. 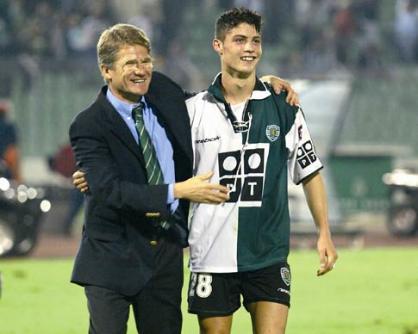 At the age of 15 Cristiano was diagnosed with a racing heart disease which forced him to give up playing football. But destiny moves in its own way. He went for operation and started training only few days later. There was nothing stoping this player to become the world’s best footballer. In his 25 appearances for Sporting he scored 3 goals.

In April 2013, Sporting honoured Ronaldo by selecting him to become the 100,000th member of the club.

Ronaldo came to the attention of Manchester United manager Alex Ferguson in the summer of 2003, when Sporting defeated United 3–1 in the inauguration of the Estádio José Alvalade in Lisbon. Ronaldo’s performance impressed the Manchester United players, who urged Ferguson to sign him. 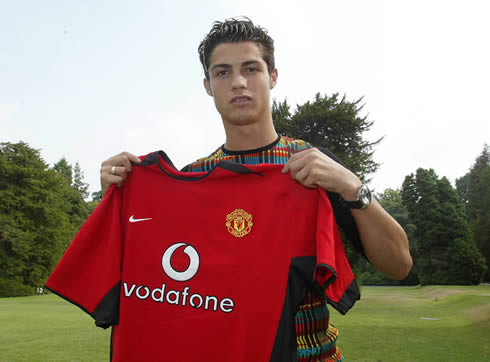 He is one of the most exciting young players I’ve ever seen,” Sir Alex.

Soon after Manchester signed him for £12.2 million. He became the first Portuguese player and Sir Alex Ferguson gave him the No 7 shirt. He scored his first goal for Manchester United with a free kick in a 3–0 win over Portsmouth on 1 November 2003.

He won his first trophy, the FA Cup, in 2004 after beating Millwall. And than there was no stopping for Ronaldo. In 2007, Ronaldo was the first player in England to win all four main PFA and FWA awards.

In his 196 appearances he scored 84 goals for Manchester united.

After playing 7 years for Read Devils he was signed by Real Madrid. He became the world’s most expensive player when he moved from Manchester United to Real Madrid in 2009 in a transfer worth £80 million. When Ronaldo had eventually completed his transfer to Real, he expressed his gratitude towards Ferguson for helping him develop as a player, saying,

He’s been my father in sport, one of the most important factors and most influential in my career

On 6 July 2009, he was presented to the world media as a Real Madrid Player, where he was given the number nine shirt. At his presentation at the Santiago Bernabeu Stadium he was honoured by 80,000 to 85,000 fans, surpassing Diego Maradona’s record of 75,000 fans when he was presented in Italy, after he was transferred from Barcelona to Napoli in 1984.

In 2009 he broke a Madrid club record when he scored in a league match against Villarreal and thus became the first ever player to score in his first four La Liga appearances. On 6 December, he was sent off for the first time in his Madrid career during Real’s 4–2 victory against Almería, a match which also saw him miss a penalty. On 5 May 2010, Ronaldo scored his first Real Madrid hat-trick in an away game against Mallorca. 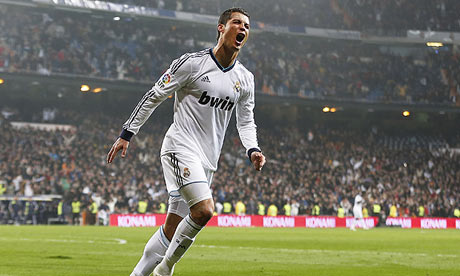 With the departure of Raúl during the summer of 2010, Ronaldo was handed the number 7 shirt for Real Madrid. On 23 October 2010, Ronaldo scored four goals against Racing de Santander, the most goals he had ever scored in a single match

On 17 August 2011, Ronaldo scored his 100th goal with Real Madrid with a first-half equaliser against Barcelona.

In May 2012, he become the first footballer to score against every team in a single season in La Liga. Ronaldo holds the record for most goals scored in a single UEFA Champions League season, having scored 17 goals in the 2013–14 season.

On 30 January 2013, against Barcelona in the Copa del Rey, Ronaldo made his 500th club appearances. He was the first non-Spanish to captain Real Madrid in a Clásico in the last 60 years.

In December 2014, Ronaldo became the fastest player to score 200 goals in La Liga when, in his 178th La Liga game, he scored a hat-trick against Celta Vigo; his 23rd hat-trick was also a La Liga record. In his 184 appearances for real he scored 205 goals up-till now.

After months of speculation surrounding his future, Cristiano Ronaldo signed a new contract with Real Madrid on 15 September that would keep him at the club until 2018, with a salary of €17 million , making him the highest paid player in football.