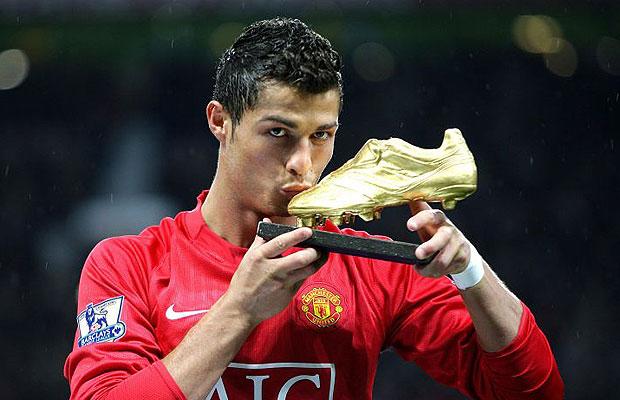 • Real Madrid forward’s 48 goals wins award for record fourth time
• Manchester City’s Sergio Agüero a distant third with 26 goals
• The Golden Shoe: is it time to give the weighting system the boot?
Cristiano Ronaldo ended the season without winning a trophy for Real Madrid but at least he can console himself by taking home the European Golden Shoe for a record fourth time.

Ronaldo’s hat-trick against Getafe in Real’s final La Liga game of the season meant he finished with 48 goals from 35 appearances. His nearest competitor, Lionel Messi managed 43 from 38 appearances for Barcelona. Ronaldo’s total was two short of the all-time record of 50 goals that won Messi the title in 2012.

Ronaldo also won the Golden Shoe in 2008 while he was at Manchester United, 2011 with Real Madrid and shared it with Luis Suárez last year.

The award is based on a points system that allows players in tougher leagues to win even if they score fewer goals than a player in a weaker league. Weightings are determined by the league’s ranking on the Uefa coefficients, with goals scored in the top five leagues multiplied by a factor of two and goals scored in the leagues ranked six to 21 by 1.5.

Sunderland’s Kevin Phillips remains the only Englishman to win the award for scoring 30 goals in 2000.