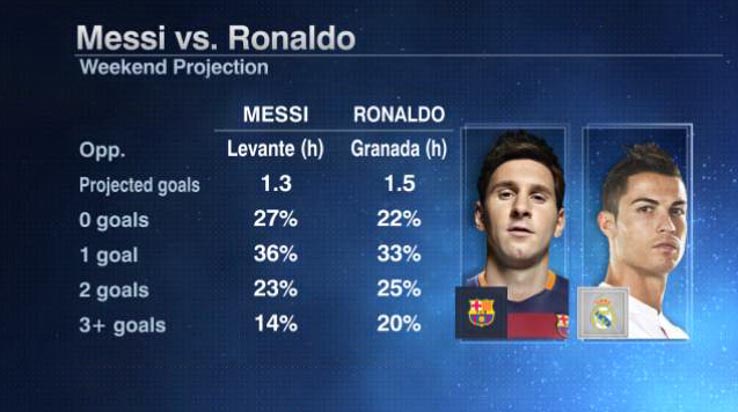 After going two games without a goal to start the season, Lionel Messi and Cristiano Ronaldo both opened their league accounts last weekend.

Messi got Barcelona’s winner at Atletico Madrid but Ronaldo was the main headline-grabber with a five-goal haul for Real Madrid at Espanyol.

Cristiano Ronaldo and Lionel Messi to score this weekend – projection

This weekend, Ronaldo and Real Madrid host Granada on Saturday at the Bernabeu before Messi and Barcelona welcome Levante to the Camp Nou a day later.

ESPN’s projection model, which predicts how the rivals will fare each week and over the whole season in La Liga, has run the numbers and both are tipped to find the net, with Ronaldo seen as being slightly more likely to score.

Ronaldo was the preseason pick to score more goals and, after last weekend’s heroics, he takes over from Messi as the favourite to win the head-to-head battle.

With Ronaldo having taken a 5-1 lead, the Portuguese forward is now favourite in every category.
“These projections account for the historical performance (goals scored and minutes played) of the two players since 2010, strength of opposing defences faced (measured by SPI defensive rating), game location, and the potential for injury or missing games. Based on these inputs, the predictor will estimate the chance of each player scoring any number of goals for each remaining game. From this, we can project the total number of goals scored, hat tricks, and the chance of each player accruing more goals than the other over the course of the entire Liga season.”