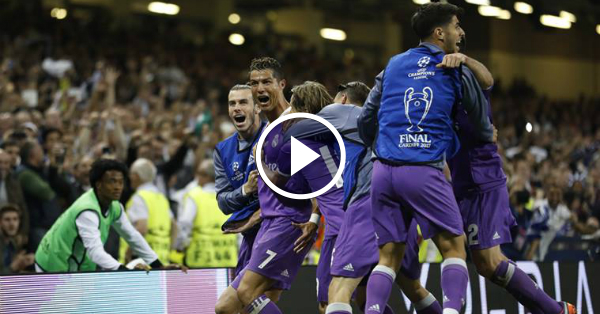 Real Madrid faced Juventus in the final match of the Champions League 2017. Defending champions Real Madrid managed to take back the trophy of the tournament, with the scoreboard reading Juventus 1-4 Real Madrid. A lot of expectations was on Ronaldo and his boys especially after their win in La Liga.

From the very beginning of the match, the level of energy was high, from the players to the audience members. Chances began to flow in, especially as Juventus tried to score, by hook or by crook. In the 12th min, Dybala actually got booked for pushing Kroos.

In the 20th min, Ronaldo scored a beautiful goal. Thus, he became the opening goal scorer in the UCL final match of 2017, and helped his team take the lead against Juventus, as Benzema and Ronaldo made a stunning partnership till the latter scored. However, this was leveled by Mario Mandzukic in the 27th min. Chances kept coming in the way of Real Madrid, as the team’s star players kept making rounds in front of the opponent’s box.

The first half thus came to a close with a score of Juventus 1-1 Real Madrid. As the second half began, the players seemed much fiercer, and yellow cards started to rain. Eventually, Real Madrid picked up amazing pace. Real Madrid took the lead again as Casemiro scored a wonderful goal. This was closely followed by Ronaldo’s second goal of the match. Interestingly, this was also Ronaldo’s 600th goal for his club and country. Thus, he reached a landmark in the final match.

Lots of bookings and chances followed, and Cuadrado got sent out of the ground with two yellow cards. In the 90th min, Asensio scored the last goal of the match, thus ensuring Real Madrid’s win against Juventus. Thus, Real adrid walked away with their 12th European Cup.