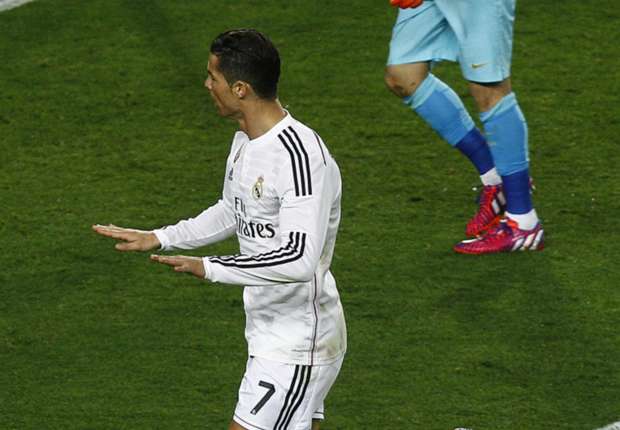 Cristiano Ronaldo is never far away from the spotlight. The 30-year-old forward has endured some testing times in 2015 as his own form has dipped along with that of his club. And to top it all off, he is now in trouble for his gestures on the football field as well.

Calm down, Cristiano – Ronaldo’s rude gestures have no place with Real Madrid or Portugal

The Portuguese produced an improved performance for Real Madrid in last Sunday’s Clasico away to Barcelona but still caused controversy. The president of Spain’s Professional Football League, Javier Tebas, revealed the three-time Ballon d’Or winner could be banned for his gestures in the Camp Nou clash.

Ronaldo was booked by referee Antonio Mateu Lahoz for diving late in the first half and was clearly furious with the Spanish official. Television footage after the match showed that Cristiano challenged the referee following the incident, touching his genitals while shouting “Mateu! You like it, eh?”

Luckily for Ronaldo, the Valencia-born official opted to ignore the protests, but could just as easily have handed out a second yellow card to the Madrid forward, which would have left Carlo Ancelotti’s side with 10 men for more than half the game.

“If Ronaldo touched his balls, then there should be a sanction,” Tebas said earlier this week. “We can’t allow these gestures. There is no place for them in football.”

Six minutes earlier, Ronaldo had equalised for Madrid as he poked home following a fine move involving Luka Modric and a brilliant back-heel by Karim Benzema. He is also in trouble for his “calm down” gesture aimed at the Camp Nou crowd after his goal.

“We have to be careful with provocative gestures from a player when they score a goal or conduct that could incite violence among the spectators,” Tebas said.
In Ronaldo’s defence, however, he was subject to a torrent of boos and abuse every time he touched the ball in the Camp Nou clash and his “calma, calma” gesture is not actually offensive. In fact, it is really no different to when Raul put his finger to his lips to silence the Barca crowd in 1999 or when Luis Suarez did the same at the Santiago Bernabeu back in October.

The genital gesture, however, is inexcusable and the Portuguese could face punishment for the obscenity aimed at Mateu last Sunday. And that, of course, follows hot on the heels of other controversial actions by Cristiano in 2015.

In January, Ronaldo reacted angrily when team-mate Gareth Bale failed to square the ball and missed an easy chance at the Santiago Bernabeu in a 3-0 win over Espanyol, while the Madeiran was sent off for aggression at Cordoba later that month and walked off the pitch brushing the Club World Cup badge on his shirt in an act of arrogant defiance.

More controversy came earlier in March as Ronaldo showed his frustrations after his acrobatic effort against Levante was cleared and Bale scored the rebound instead. Later in that match, the Portuguese again thought he had scored, only for the goal to go to the Welshman, who stuck out a boot to divert his team-mate’s effort into the net.

Again, Ronaldo did not appear amused and his latest gestures have now landed him in hot water. Indeed, since his much-publicised split from Russian model Irina Shayk earlier this year, he has struggled to contain his emotions on the pitch.

“Sometimes I don’t like his attitude,” Madrid legend Santillana said earlier this month. “He should think a little more – if us madridistas don’t like it, then imagine how our rivals feel. He shouldn’t be booed, but he does have to correct his cocky attitude.”

As captain of Portugal in the Euro 2016 qualifier against Serbia on Sunday, Ronaldo will be expected to behave better than he has with Madrid in recent times. And to avoid another ban at his club, he would do well to take heed from his very own gesture at Camp Nou last Sunday – and calm down a little himself.