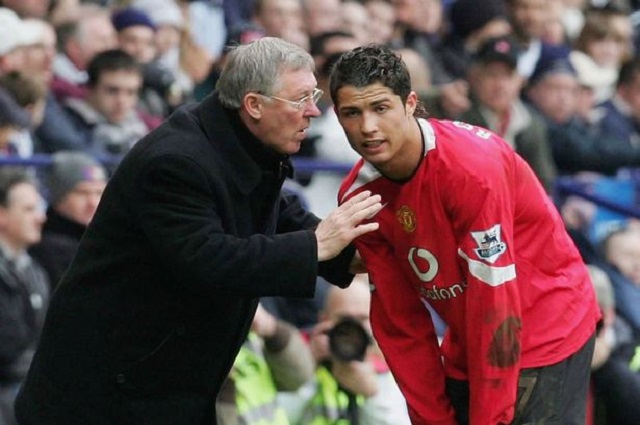 Sir Alex Ferguson is trying to convince Cristiano Ronaldo to come back to Manchester United. According to news Alex met ronaldo to convince him, Fergie had dinner with the Real Madrid superstar after watching their embarrassing 4-3 Champions League home loss to Schalke last Tuesday.
Manchester United have jumped ahead of Liverpool in the race to sign Burnley striker Danny Ings. It means United could ditch on-loan Radamel Falcao this summer – rather than pay Monaco £46million to make his move permanent – and replace him with free-agent Ings.

In the pic Alex Ferguson can be seen whispering something in the ear of Ronaldo.

Douglas Costa is set to start Chelsea’s rebuilding spree following their Champions League flop. The Brazilian midfielder has agreed in principle to sign for the Premier League leaders at the end of the season in an £18million deal.

Palermo president Maurizio Zamparini says a £30million bid has been made for striker Paulo Dybala – but refused to reveal which club has placed it. Arsenal and Manchester United are thought to be chasing him.
An internal interesting news is also there, Inter Milan boss Roberto Mancini wants to raid former club Manchester City for three of the club’s stars in a £45m swoop. The Italian has his eyes on Yaya Toure for £20m, Stevan Jovetic for £18m and Aleksandar Kolarov for £7m.